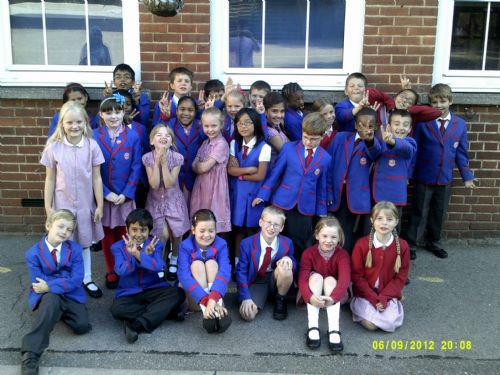 Hello and welcome to Hawks' class page! Throughout the year we will be keeping you updated with all of the things that we get up to.

Hawks had a very busy Autumn term! To begin with we had great fun down at the Rye investigating insect habitats, and we really enjoyed watching Puss in Boots at the cinema during National Schools Film Week.

After October half-term we stepped back in time and became Tudors for a day at Sulgrave Manor in Northamptonshire. In the very same week we learnt how to speak Hindi during International Day! If that wasn't enough, we were fortunate to receive a visit by Steve Cohen, editor of Bucks Free Press! (Please see the link below). In the last few weeks of term, we dazzled parents with our acting and singing during our Tudors class assembly, and again during the school's Christmas performance. With Christmas fast approaching, Mrs. Beaton and Mrs. Brooks kindly helped us to make fabulous money containers!

After the Christmas break, Hawks were as busy as ever! We were very excited to receive a 'Culture in a Box' from our eTwinning school (See Year 4's eTwinning webpage), and we looked great in green as we learnt how to reduce our carbon footprint during Eco Action Day. We also sought out local people's attitudes about the development of HS2, before having a class debate to share our opinions on the issue.

In the run up to Easter, Hawks had great fun dressing in red on Red Nose Day, and we had a fantastic time learning about how to avoid a variety of dangers at Hazard Alley! With only a few days to spare until the end of term, we managed to squeeze in an inter-house badminton competition at Wycombe High School.

The first half of Summer term has been very eventful for Hawks. In early May, several members of the class participated in a tennis competition at the Bucks Indoor Tennis Centre, followed by an athletics competition at the Wye Valley School. The children performed very well, and were awarded second place in both competitions. On Viking Day, Hawks took up their swords to raid a monastery! To celebrate our success in battle, we held a mighty feast. Finally, just before half-term, we donned our lab coats and became scientists as we attempted to unravel the mystery of the alien crash-landing!