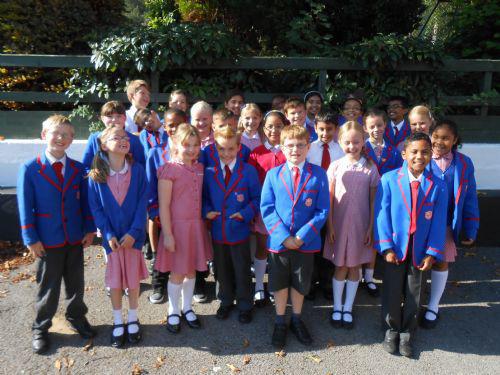 Hello and welcome to Eagles' class page! Throughout the year we will be keeping you updated with all of the things that we get up to.

In early October, Eagles took part in St. Michael's Winter Games. Although the competition was very fierce, the children thoroughly enjoyed putting their skills in netball, tag rugby, football and table tennis to the test. Later that day, we performed alongside our buddies in Year 2 at All Saints Church during this year's Harvest Festival. Finally, just before half-term, Year 5 went with Year 6 to Cineworld in the Eden Centre to watch Rise of the Guardians!

In the run up to Christmas, Eagles visited the River and Rowing Museum in Henley to learn more about the Water Cycle and how water is managed locally (See below). In the last few weeks of term we dazzled parents with our singing and dancing during the school's Christmas performance, and had great fun covering our classroom tables with all manner of festive decorations for our Christmas Party!

Eagles kick-started the spring term with a visit to the Ashmolean Museum in Oxford to learn about the origins of the Olympic Games in Ancient Greece (See below). Shortly after that, we donned our togas and stepped into the past for our Ancient Greeks class assembly! As if that wasn't enough dressing up, on World Book Day we came to school dressed as our favourite book characters. With Easter looming, Eagles took to the stage in spectacular fashion during the Energize performances.

The first half of the summer term was very short, which meant that Eagles were busier than ever! Highlights included our Geography fieldtrip to Tylers Green and making cracking inventions for Wallace and Gromit during Activity Week (See below).